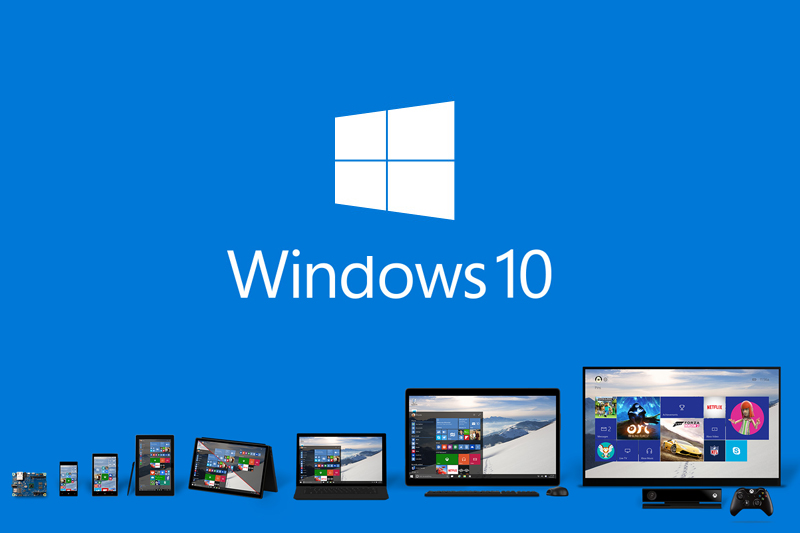 I am one of those few guy who has been using Windows since I was practically born. Yep, that’s true. I have used Windows 95 right when I started computing. Followed by Windows 98. Which was used for many years. Then Windows 2000 which was basically a shiny version of Windows 98 but with other improvements and of courses a neatly designed UI. Then Windows XP which I still use sometimes on my college computer. And then finally the Windows 7 move which was too brilliant to be true. And since Windows 8 came later, I used it too. Till now, Windows 98, XP and 7 have been the dearest to me. Loved pretty much every aspect of them.

This doesn’t mean that I am a Windows fanboy though. I love and use Ubuntu and find it better if I want to do programming and work related stuff. So, as we all know that Windows 10 in the town, well not entirely. It’s supposed to be released next month that is in September. But for us customers and loyal users, Microsoft has given a great opportunity by giving us the Insider Preview version of Windows 10. Which basically gives the idea of how Windows 10 will work on your PC. Or the core features of it including the ones which will be released in the final release. So you can say that you are getting the real product for a free usage just to check if you like it. A demo of a sort.

While I was personally using the Windows 10 Pro Insider Preview, what I found was that they have made it more user-friendly, which is a trend in all the tech sector nowadays. And along with that it has also given a clean UI which resembles the material design we get to see in the customer oriented software’s like skype and TeamViewer, etc. The other changes worth mentioning are that Windows 10 has redesigned the UI of the settings panel we got to see in Windows 8 and 8.1. Here we have almost all the settings we had in the Control Panel. Now for the surprise, we get a notification panel like we have in our existing smartphones. It is quick, it is useful and it is easy to use. Windows 10 feels more like a tablet cum desktop OS than just a desktop OS. 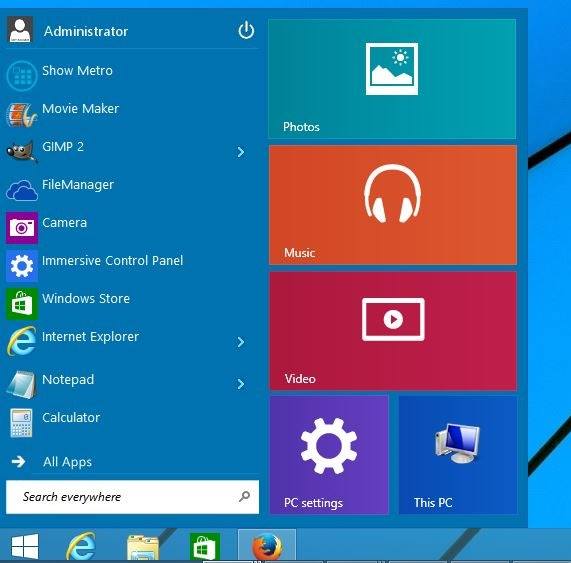 Welcome back to the old era of Windows where you happily used this very Start Menu. It is back in Windows 10 as it was really missed by the people who used Windows 8. It was started back in Windows 95 and then discontinued for two versions of Windows that is windows 8 and 8.1. Now that its back, it is back with a complete redo. It is redesigned by adding the traditional start menu of the left side and on the right we have the tiles which were there in the two previous versions. These are live tiles and can change accordingly. Like the news tiles shows the important news which is the trending topic out there. There is a File Explorer option given below for easier access to the Windows Explorer. Below is the All Apps like which basically means all the software’s which are pre-installed and have been installed by you later. 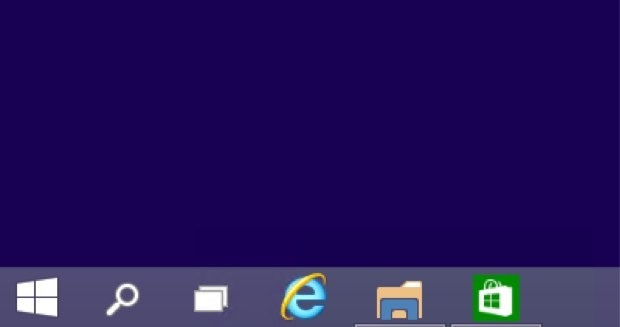 This is the taskbar. It is also decently designed. Has no other fancy widget which would have made it look ugly. And notice that the icons have a blue bar below them which shows that they are open. Much like in the previous version. Although have you noticed the magnifying glass below? It is a sweet new feature from Windows. That is a search box given right there. It searches the local files, the history and also the internet. An all-in-one search box. Also it is been equipped with Windows Cortana, an AI (Artificial Intelligence) which helps us with the operating of the windows.

Here is the right-hand corner, it has all the previous icons which are used of. Namely the Network, volume and the clock. And there is the tray icon below which shows which software’s are running in the background. The color of the icons has been changed to white. Maybe because by this it looks much cleaner or decent, we don’t know, but it looks good. The clock here is pretty much the same from previous versions, although the calendar which pops up when you click on it is entirely different.

Below is the calculator which has been totally changed. I remembered the first time when I used it and it crashed. No worries though, it isn’t crashing anymore and looks very good. Especially that material design which it has. It has other modes like scientific, programmer, converter. The converter mode is where you can use it convert different types of units. Currency isn’t there yet but we have most of the other important units like the weight, energy, area, time, data (GB and MB). Perfect for daily problems. 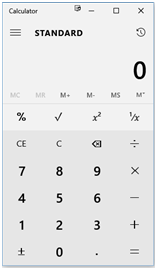 This is the settings panel 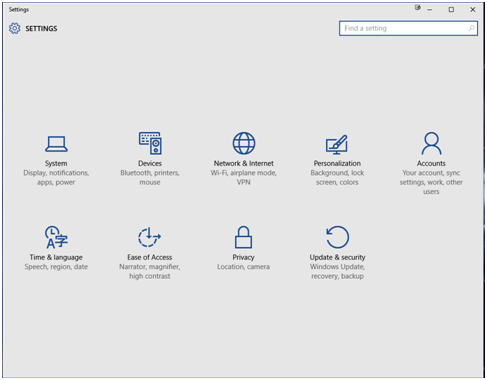 It has almost all the settings from the control panel. It is very lucid to use, but to be honest it has a stupid interface that feels as if it has assumed that we are toddlers and don’t know what we are doing. Nevertheless, it is useful for people without a techy background. 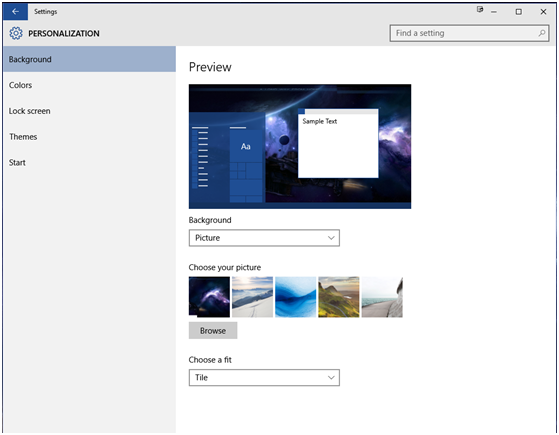 Here is the personalization panel which shows the different options related to personalizing the windows experience. 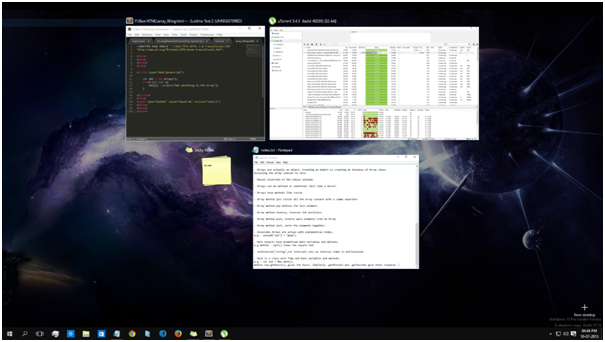 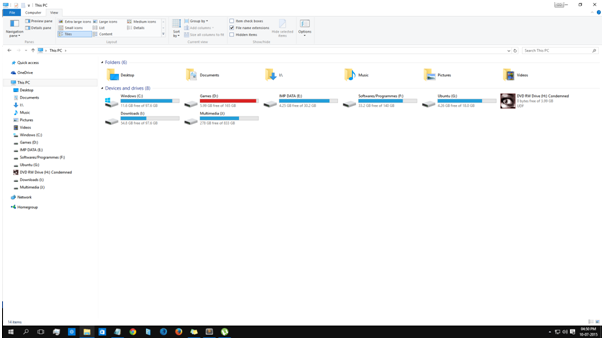 The file explorer hasn’t changed a lot, although has some more features like recent files, recent folders. And the homepage for the explorer has changed to ‘This PC’ which shows different quick access points. Icons are more bright but okayish.

Personally I would be happy to use Windows as my primary operating system as long as they don’t keep sending a lot of updates. The OS looks pretty brilliant in its standard and will surely have a lot of years of usage up front of it. I recommend you to use it as you would be pleased.